ELDER OF THE YEAR 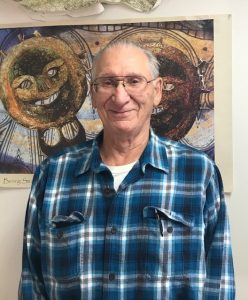 Robert S. (Nigluq) Bahnke, Sr., or better known as Bobby, was born to Frances Cora Cook on August 21, 1938 at Fort Davis outside of Nome, Alaska. He is the second oldest of ten children with his mother Frances. Bobby was adopted to one of his mother’s best friends, Elsie Sophie (Nelson) Bahnke and her husband Perry Tucker Bahnke. Bobby was raised at Bluff and Nome, Alaska.

As a youth, along with his younger sisters Angeline Elsie (Bahnke) Green and Dorothy Ann (Ball) O’Connor, the family camped at Nuuk, Topkok, Silverbow, Haycock, Kuzitrin, all along the coast where they subsisted and were taught important lessons in how to hunt and live off the land. This was the start of a lifelong knowledge of the lands, rivers and coast that including areas for hunting, fishing, berry and green picking, growing vegetables, ice crabbing and hand lining. His father and grandpa both taught him how to gold mine including what to search for when mining for gold.

Bobby learned to fly at a young age.  He loved flying around our region – making sure our people, lands, rivers and properties were not in harms way from wild animals or trespassers.

In the early 1970’s Bobby moved his family to Kotzebue. He brought the kids on the ice to fish for Shee fish and lingcod, and hunt for caribou, teaching them the Kotzebue way of subsistence living. He instilled this in his kids: if you shoot it, you must prepare it and eat what you hunt. Later, Bobby moved his family back to home to Nome when he accepted a job with the State Department of Transportation.

Also, when his children were young he and his family would fly to Shishmaref for reindeer round up. Teaching his children about their mother’s ways of subsistence living in her village. He and MaryAnn taught their children how to hunt for izza, reindeer herd and berry pick. Also, how to go up the river to bring home fresh drinking water for their maternal grandparents.

Today, at the young age of 81, Bobby still loves camping, boating, 4-wheeling in the summer, and snow machining in the winter. Bobby taught his family the subsistence way of life, the way he was taught that had been passed down for generations. Guiding values include to care for the land, hunt and prepare foods in a respectful manner, never take more than you can eat or use, and to give your first catch to an Elder’s family.

Bobby is now married to Karen Dickson Bahnke. Bobby and Karen enjoy raising their granddaughter Jayda Dickson Tucker. Karen’s daughters are Courtney Tucker, and Adrienne Dickson Bahnke, who Bobby adopted when she was 16.

Bobby has served on Sitnasuak’s Land Committee since 1974. He also served as a SNC Board of Director in the 1980’s. The love of the land and the protection of our resources are his top priorities. Bobby is honored with this recognition by Sitnasuak.