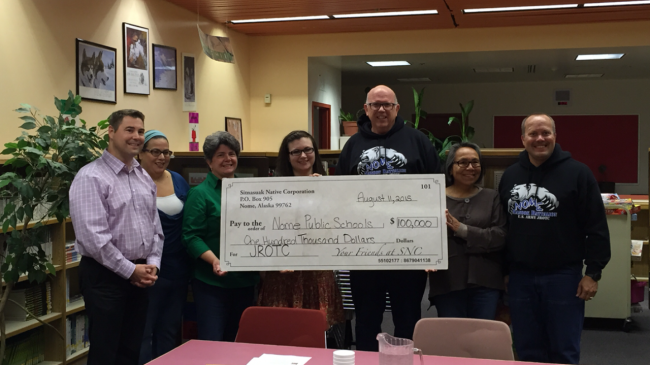 Sitnasuak Native Corporation (Sitnasuak), is pleased to announce the continued support of Nome Public Schools JROTC program, the Nanook Battalion of $100,000.  This is the ninth year in a row that Sitnasuak has donated to the JROTC program. Sitnasuak Foundation Coordinator Chrystie Salesky and Director Barb (QasuGlana) Amarok represented Sitnasuak Native Corporation in the presentation of the check to Nome Public Schools.

This support of the program is valuable to the students who participate and ultimately, it contributes to the whole community by helping the Nanook Battalion youth become good citizens and also contributing members of society.  The values it teaches, such as respect and responsibility, just to name a few, are consistent with Sitnasuak’s values.

After about five years of inception of the program, the school district could no longer pay its share of the instructors. Sitnasuak stepped in and has been paying the local share ever since.

Sitnasuak stepped up in yet another way in 2014. When long delays loomed for delivery of some cadet uniforms, Sitnasuak Technical Services, LLC (SNCT) – Sitnasuak’s subsidiary that manufactures military apparel – promised to deliver them directly right away.

As part of the Alaska state emphasis on subsistence curriculum, the program also emphasizes marksmanship safety and has an active rifle team that is one of the top JROTC rifle teams in Alaska.

Because of the high level of involvement in the community by the cadets and the battalion’s high inspection scores, the Nanook Battalion has been rated as a National Merit Unit by the U.S. Army.