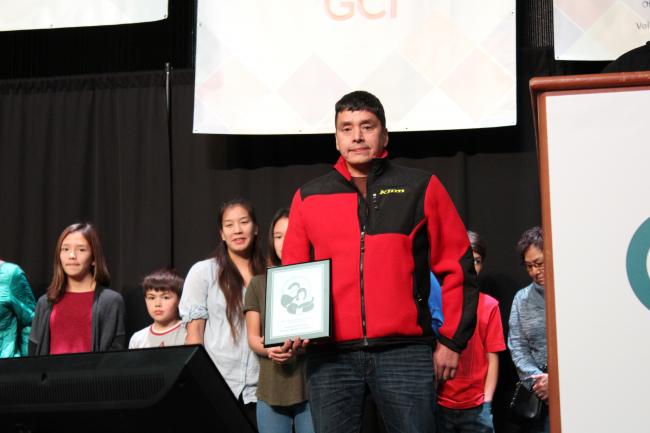 Sitnasuak Native Corporation (SNC) is pleased to announce Franklin “Buddy” Okleasik, Jr. was named the 2017 Parent of the Year by the Alaska Federation of Natives (AFN).

Love of children is one of our important Inupiaq values. Buddy is blessed with six children – son Ryan, stepson Jordon, and daughters Ivory, Zoe, Heidi and Grace. Unfortunately, his late wife Denise Amarok-Oliver passed away in 2012. Through this hardship, Buddy stepped up as a single father and took on the responsibilities of two parents in raising their family. In addition to everyday work and family duties, he has been positively involved in his children’s education and activities. He has coached their softball teams, volunteered in their schools, and supported their many sports from basketball, swimming to Native Youth Olympics. He supports and holds high expectations of each child which is evidenced by their accomplishments. Three of his daughters, Zoey, Heidi and Grace, have attended the Anvil City Science Academy (ACSA). His oldest daughter, Ivory, recently graduated from Nome Beltz and was accepted to attend flight training in California and is currently attending the University of Alaska Anchorage.

According to Chairman Bobby Evans, “Every community has a hardworking parent like ‘Buddy Okleasik’ and we thank AFN for recognizing our friend and fellow Sitnasuak Shareholder Buddy.” Sitnasuak expresses congratulations to Buddy Okleasik in receiving this honor and award from the Alaska Federation of Natives during the 2017 Convention in Anchorage, Alaska.

SNC is headquartered in Nome, Alaska, with operations in Nome, Anchorage, Wasilla, California, Virginia and Puerto Rico. Sitnasuak’s family of companies and brands include Bonanza Fuel, Bonanza Express, Fidelity Title, Mat-Su Title, Nanuaq, Mocean, SNC Technical Services, and Sitnasuak Construction Services. SNC is one of the Alaska Native village corporations created in 1971 under the Alaska Native Claims Settlement Act (ANCSA). Today, SNC is the largest of 16 village corporations in the Bering Straits region with over $130 million in annual revenues. SNC is owned by almost 2,900 Alaska Native shareholders. For additional information on Sitnasuak as well as our business products and services, please visit our web site at www.snc.org or like our Facebook page www.facebook.com/Sitnasuak/.